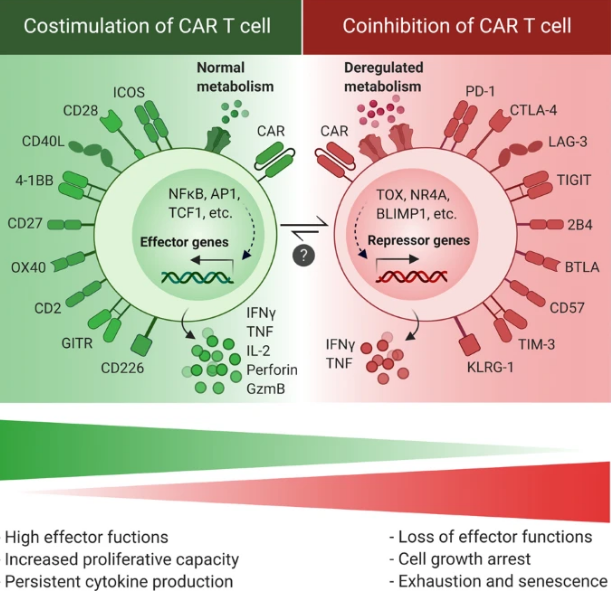 In a recent decade, genetically modified immune cells, particularly chimeric antigen receptor (CAR) T cells, have raised enormous interest in clinical trials [1]. Several generations of CARs have now been developed that are different in the number of intracellular domains or CAR activation mode (Fig. 1). Despite the dramatic clinical benefit of CAR T cell therapy in a broad spectrum of cancer types, a large fraction of patients that achieves remission with CAR T cell therapy displays disease relapse within a few years [2, 3]. Several important explanations of treatment failure in CAR T cell therapies exist, such as tumor antigen escape and inefficient CAR T cell trafficking into the tumor site. However, it is widely thought that limited CAR T cell expansion and persistence in the hostile tumor microenvironment (TME) represent additional key impediments to efficacious CAR T cell responses and durable clinical remission following CAR T cell therapy [4]. The observed reduction in proliferative capacities and persistence of CAR T cells is associated with a generalized dysfunctional phenotype that is hallmarked by impaired proliferative and cytotoxic abilities. Importantly, the root cause for development of this dysfunctional state in CAR T cells is the activation of pathways that promote excessive CAR T cell differentiation, exhaustion, and senescence. Indeed, less-differentiated and less-exhausted CAR T cells have been reported to lead to a better outcome [5]. Central causes for in vivo induction of exhaustion and senescence are persistent stimulation of CAR T cells by high levels of tumor antigens in the face of chronic exposure to a suppressive TME [6]. At the same time, CAR T cell differentiation and exhaustion may be further accelerated by CAR antigen-independent tonic signaling [7].

Given the fact that the efficacy of CAR T cells depends on their capacity to infiltrate the tumor site and directly interact with tumor antigens, in vivo induction of exhaustion and senescence pathways is an unavoidable event in CAR T cell therapies. Indeed, once T cells are activated by the persistent antigen presentation, they subsequently become dysfunctional due to the elevated and sustained expression of inhibitory receptors [8]. Therefore, it is more attractive to focus on approaches to prevent intrinsic dysfunctional pathways in CAR T cells (e.g., inhibitory receptors signaling) and generate “exhaustion-resistant” cells, rather than aiming to modulate their exposure to tumor antigens in the TME. Through this strategy, the “exhaustion-resistant” CAR T cells might maintain their effector functions even during a prolonged exposure to their cognate antigen. In concordance with this, modified CAR T cells with disrupted pathways inducing exhaustion or senescence have shown a significantly higher persistence and antitumor activity, providing a promising outlook for reversal or delay of CAR T cell exhaustion and senescence as a way to harness the full potential of this highly effective treatment modality [9,10,11].

Concept of exhaustion and senescence

Although exhausted T cells display some phenotypic markers that are typically associated with effector and memory states [12], they show phenotypically and functionally different properties from both effector and memory subsets [13]. Since exhaustion and senescence share several overlapping characteristics such as defective effector functions, impaired proliferation, and cell cycle arrest, they might be used interchangeably. However, there are certain characteristics that can be used to distinguish these states from each other, including cytokine secretion signatures, and expression of cell surface receptors and transcription factors [14].